Last week, I tweeted the following: 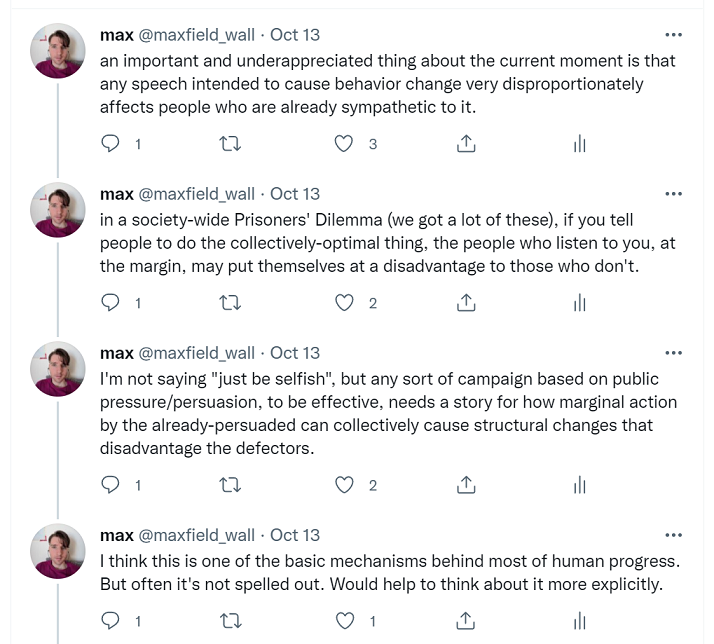 Zach Aysan encouraged me to develop these ideas further, and I do believe this issue warrants more discussion than a few tweets. This post is my attempt to formalize the idea with some concrete examples.

Before getting into that, it's worth noting prior art. I came up with my version of this idea in 2020 when researching memetics. A few months later, I stumbled upon the Slate Star Codex post "Should You Reverse Any Advice You Hear?". Of course, I went through the usual cycle:

"my god, has Scott already had all of my good ideas? Am I just ponderously rediscovering them?"

"No wait... don't think like that. It's great that Scott has already written about this! It's an extremely important idea, and he has a large, dedicated following... surely that means the idea will have already permeated into the discourse?"

"But... this post is from 2014. If the idea had really permeated anywhere, why am I only finding out about it in 2020? Uh oh... maybe this just isn't a very viral idea. Or SSC readers live in a bubble. Or I'm crazy and no one else thinks it's important."

Scott's post is focused on advice and gives many concrete examples. My post is more abstract, and focused on collective action problems. You may be better off reading Scott's post (first).

I'm not going to define "meme" here. For this post, it's enough to think of a "meme" as a bit of language that can be spread between humans.

Many memes suggest some sort of behavior change. For example, the meme "we should protect the environment". When combined with other memes, like "recycling protects the environment", the net effect is often[1] to put more effort into recycling.

If I believe these memes, and I act on them by actually recycling, then I have internalized these memes. (This is a true example. Shocking, I know.)

I have internalized a meme if I have that meme somewhere in my psyche, and I act on it. Sometimes, "acting on it" just means attempting to spread the meme to others. (Nagging other people to recycle.)

If I re-encounter a meme I am receptive to that I have already internalized, this re-encounter will cause me to internalize the meme more strongly (up to some maximum, depending on context).

This is a simple model for how people who encounter new beliefs may or may not incorporate those beliefs into their worldview, and go on to act on them.

In the short-term, losing all this divested capital causes some fossil fuel projects to be canceled, and the sell pressure from the divestment causes fossil fuel share prices to drop.

Hedge fund managers hear about the news, and move some of their own capital over to cover the shortfall. Due to Princevard's divestment, they get in at an attractive price. None of this has changed the fundamentals of the fossil fuels as a business, so those canaceled projects get restarted. The net effect is:

The hedge funds have fewer scruples, so they can plow these excess returns back into more fossil fuel investments. Or, you know, superyachts.

I used to assume oil and gas investments had returns close to the market average. That is, until I watched this David Swensen talk, where he reveals that Yale's endowment's oil and gas portfolio reaped annualized returns of 24% from 2000 through 2010. (The S&P 500 has negative returns over the same period.)

So, why does this divestment fail to actually protect the environment?

Because it's unilateral action in a competitive equilibrium. Capital moves around easily, and Princevard's divestment does nothing to change the fundamental incentives in the system. Princevard stepping back from an opportunity merely disadvantages Princevard and gives that opportunity to less-scrupulous actors.

Is This Example True?

In September 2021 Harvard committed to make no new investments in fossil fuels, and stated that its current fossiel fuel investments, which comprise less than 2% of the endowment (so, less than $840 million) will eventually be liquidated.

If we conservatively take the total global market cap of fossil fuel companies as 5 trillion (add sources), Harvard's divestment is less than 0.02% of this. It's a drop in the bucket. Frankly, at the time of writing, I don't think anyone knows if Harvard's divestment will have any long-term financial impact on the industry, or what (if any) impacts it'll have on endowment returns.

The divestment activists probably also know this. Fighting for divestment makes more sense if you think it's about signaling rather than finances.

Divestment as a Signal

is a much stronger argument than

So let's run with it. "Catalyze a society-wide shift to renewables" omits a few steps, but if we boil it down charitably, in econ-speak, it must be something of the form 'there are scale effects from widespread divestment. The effect of widespread divestment is larger than the sum of divestment effects at the (current) margin'. Is this true? Maybe. We'll come back to it.

Having succeeded at Harvard, the clear next step for you, an enterprising activist, is to spread these memes to activists at other institutions. If this happens enough, eventually the scale effects will kick in?

But some other institutions will be more willing to divest than others. Building off my model above, how likely an institution is to divest depends on how receptive the people at the institution are to pro-divestment memes. We can visualize this as a distribution: 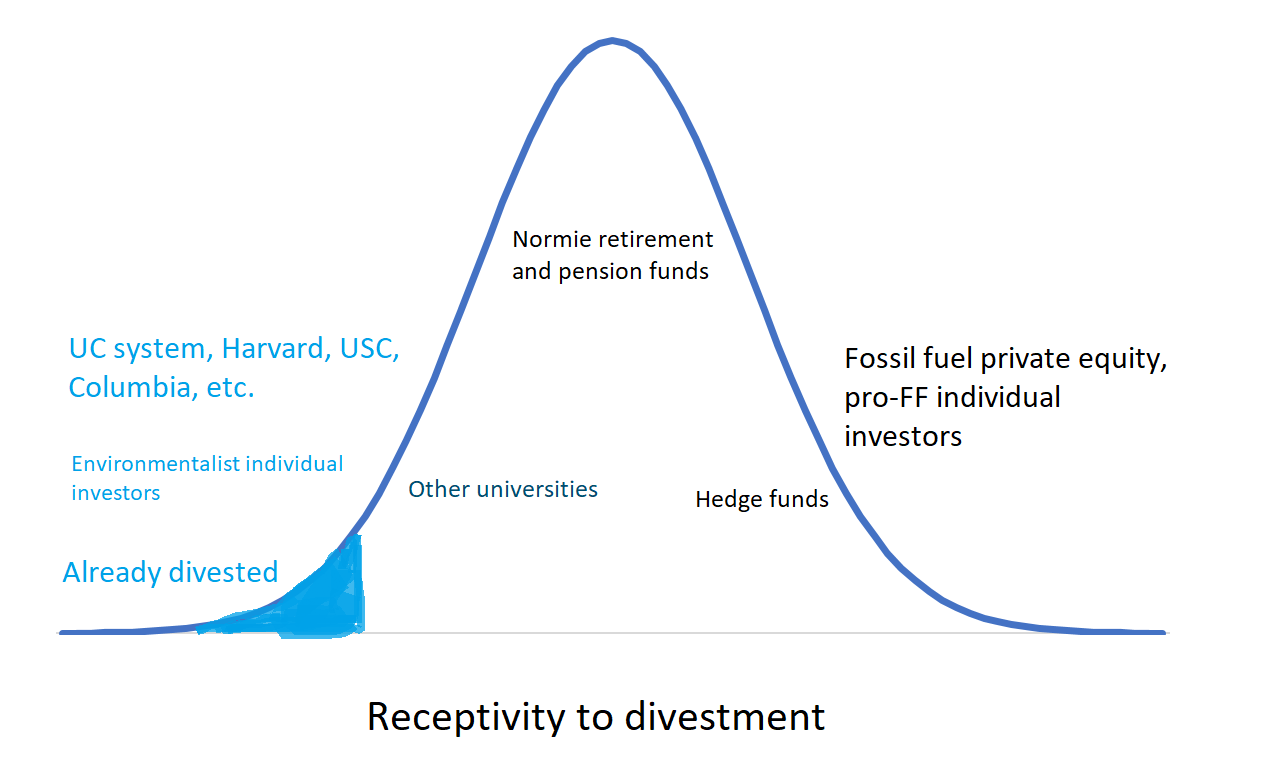 My point is simply that even if the divesment campaigns go remarkably well, absent any scale effects, there will still be lots of money on the other side of the distribution, earning ever-higher profits financing projects that supply our gasoline and natural gas.

So there better be a plan for how these scale effects are going to play out.

typically when I make this it's: * fried plantains * guacamole * black beans & white rice * fried egg (certified humane) * chips and salsa This also works well with steak, or another dish of e.g. peppers and mushrooms. plantains: after removing the skin and slicing, just pan fry on each side in coconut
Use this as a reference for the games we will play tonight. The first two are variations of two games we played at the previous LAR authentic relating meetup. The last game is new for LAR but is found in multiple authentic relating manuals available online. The goal of this
Comprehension Questions These are only about what the text says, not whether the text's claims are true (save that for the Discussion part). Try to move through these briskly, and don't be afraid to nudge your group to the next question. Please preface all of these questions with "according to